The article is no longer in our assortment.

The compact LED BC-2 beam effect by Eurolite produces impressive, room-filling mirror ball effects with 180° rotations in living rooms, home party rooms, smaller clubs and more - fully automatically.
The clear and faceted surface atmospherically swirls the beams through the room. The LED BC-2 comes equipped with three bright LEDs in the colors red, green and blue. Thanks its ultralight plastic enclosure, you can easily take this effect with you and set it up everywhere. The base plate also allows for wall mounting.

Only 0.5 kg light and easily portable with one finger - the LED PARty spot is one of the smallest and lightest entertainers among the PAR spots!

Equipped with twelve 1 W LEDs in red, green, blue and white, it shows an amazing performance and is excitingly versatile. It can be controlled via DMX or operated in standalone mode. Color change, dimmer and strobe are adjustable - and of course, there's also a sound control mode.

The LED PARty is perfectly suited for home use - for parties at home as well as for kids' rooms.

Just put the plug into the socket and get the party started!

This particularly low-priced and compact LED Strobe brings your party to life. It is equipped with 36 bright SMD 5050 LEDs and can be operated in automatic mode or by sound control via the built-in microphone. Use the two rotary controls to adjust the microphone sensitivity and flash frequency. 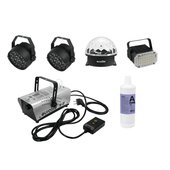 EUROLITE Party Set 1
Cookies and Tracking
In order to ensure the proper functioning of our website (e.g. navigation, shopping cart, customer account) we use so-called cookies. In addition, we use cookies, pixels and comparable technologies to adapt our website to preferred behaviour, to obtain information about the type of use of our website for optimisation purposes and to be able to play out personalised advertising. For advertising purposes, this data may also be passed on to third parties such as search engine providers, social networks or advertising agencies. In the following, you can give your consent by clicking the "OK" button or limit the use of cookies and tracking via the "Advanced Settings" button.
Further information on this can be found in our data protection declaration under Cookies. bei dem Unterpunkt Cookies zu finden.
Nachfolgend können Sie durch klicken des „OK“ Buttons Ihre Einwilligung hierzu erteilen oder über den Button „Erweiterte Einstellungen“ den Einsatz von Cookies und Tracking beschränken.
Ok
Advanced settings
Advanced settings